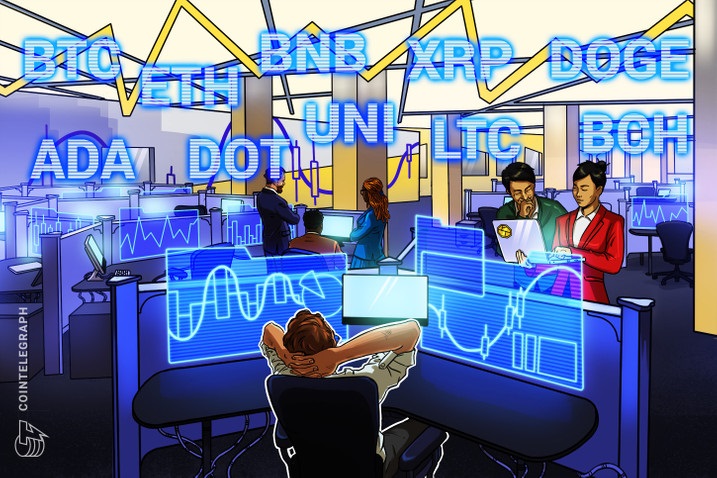 Although Bitcoin is struggling to recover from its recent crash, Ethereum is pushing toward a new high and prompting several altcoins to rally.

JPMorgan strategist Nikolaos Panigirtzoglou believes that if Bitcoin (BTC) does not break above $60,000 within the next few days, the momentum signals could weaken “for several months, given their still-elevated level.”

Another bearish voice was that of Guggenheim chief investment officer Scott Minerd who said in an interview with CNBC on April 20 that Bitcoin looked frothy and was at risk of a correction to $20,000 to $30,000.

Minerd said that such a massive fall will be part of a normal market cycle and that will not alter his long-term target of $400,000 for Bitcoin.

However, several analysts, including statistician Willy Woo, countered the bearish forecasts of technical traders with on-chain indicators. Woo pointed out that 14% of Bitcoin’s supply last moved above the $1 trillion market capitalization, hence this becomes a strong support and makes Bitcoin less likely to drop below $53,000.

A recent survey by Gemini crypto exchange showed that 13% of the respondents planned to invest in cryptocurrencies in 2021. Extrapolating the numbers to the U.S. population, Gemini said that 19.3 million adults may join the crypto bandwagon this year, which “would nearly double the current crypto investor population of 21.2 million adults.”

Let’s analyze the charts of the top-10 cryptocurrencies to spot the trends and then identify the paths of least resistance.

The bulls are buying the dips to the $54,000 level as seen from the long tail on the candlesticks of the past three days. However, the buyers have not been able to clear the hurdle at the 50-day simple moving average ($56,769), which has flipped to resistance.

The 20-day exponential moving average ($58,280) has started to turn down and the relative strength index (RSI) is trading below 43, indicating that the bears have a slight edge.

If the price turns down from the moving averages, it will increase the possibility of a break below $54,000. If that happens, the BTC/USDT pair could drop to $50,460. The bulls are likely to defend this level aggressively.

This negative view will invalidate if the bulls can drive the price above $60,000. Such a move will suggest that traders continue to buy at lower levels. A breakout of the all-time high at $64,849.27 could attract momentum traders, starting the next leg of the up-move.

Ether (ETH) strongly bounced off the $2,040.77 level on April 20, indicating aggressive buying by the bulls at lower levels. The successful retest of the breakout level at $2,040.77 is likely to attract further buying from short-term traders.

The upsloping moving averages and the RSI in the positive zone suggest that bulls are in control. If the bulls can propel the price above the all-time high at $2,545.84, the ETH/USDT pair could pick up momentum and rally toward the next target objective at $2,745 and then $3,000.

Contrary to this assumption, if the price turns down from the overhead resistance, then a few days of consolidation between $2,040.77 and $2,545.84 is possible. The advantage will tilt in favor of the bears if the pair slips and sustains below $1,900.

The failure of the bears to sustain Binance Coin (BNB) below the 20-day EMA ($476) on April 18 attracted buying on April 19. The momentum picked up further on April 20 and the bulls are now trying to thrust the price above the all-time high at $638.56 and resume the uptrend.

VORTECS™ data from Btcshop4u Markets Pro began to detect a bullish outlook for BNB on April 20 at 20:30 UTC, just as the relief rally was picking up strength.

The VORTECS™ Score, exclusive to Btcshop4u, is an algorithmic comparison of historic and current market conditions derived from a combination of data points including market sentiment, trading volume, recent price movements and Twitter activity.

The 7-day chart above shows the VORTECS™ Score for BNB flipped green on April 20 when the price was $527.05.

While the market was still contemplating the direction of the next move, the VORTECS™ Score picked up strength and BNB also followed higher, hitting $608.31 about 16-hours later.

If they succeed, the BNB/USDT pair could start its journey toward the next target objective at $832. The upsloping moving averages and the RSI near the overbought territory suggest the path of least resistance is to the upside.

However, the bears are unlikely to give up easily. They will try to mount a stiff resistance in the $600 to $638.56 resistance zone. If the bulls do not cede much ground, it will enhance the prospects of a breakout of the resistance zone.

Conversely, if the price dips back below $520, then the bears may make one more attempt to break the 20-day EMA. A break below $428 could result in a deeper correction.

The bulls are aggressively attempting to defend the 20-day EMA ($1.26). This suggests the sentiment in XRP remains positive. The gradually upsloping moving averages and the RSI in the positive zone indicate a minor advantage to the bulls.

The XRP/USDT pair may now rally to $1.56 where the bears are likely to again mount stiff resistance. If the price turns down from this resistance, the bears will make one more attempt to sink the price below the 20-day EMA.

If they succeed, the pair could extend its decline to the 61.8% Fibonacci retracement level at $1.10. Conversely, a break above $1.56 could put the bulls back in the driver’s seat.

The bulls attempted to resume the uptrend in Dogecoin (DOGE) on April 19 but they could not clear the hurdle at the all-time high of $0.45. The price turned down sharply from $0.43, indicating that traders are booking profits on rallies.

The DOGE/USDT pair has formed an inside-day candlestick pattern today, suggesting indecision among the bulls and the bears. If the price turns down and breaks the $0.27 support, the pair could decline to the 20-day EMA ($0.19).

A strong rebound off the 20-day EMA will suggest that the bulls continue to buy at lower levels. However, after such a deep correction, the next leg of the uptrend could be delayed.

If the 20-day EMA support cracks, the selling could intensify as several traders who are stuck at higher levels may book their losses. The price could then drop to the 78.6% Fibonacci retracement level at $0.14.

On the other hand, if the price turns down from the 20-day EMA, the ADA/USDT pair could drop to the support of the range at $1.03.

The flat moving averages and the RSI near the midpoint suggest the pair could remain range-bound between $1.03 and $1.48 for a few more days.

The next trending move could start if the bulls drive the price above the $1.48 resistance or the bears sink the pair below the $1.03 support.

Polkadot (DOT) bounced off $31.55 on April 20 but the buyers are struggling to build upon the initial recovery today, indicating hesitation to buy at higher levels.

The downsloping 20-day EMA ($38.96) and the RSI in the negative territory indicate that the bears have the upper hand. If the price turns down from the moving averages, it will suggest that traders are selling on rallies.

That will increase the likelihood of a break below $31.55. If that happens, the decline could extend to $26.50.

This negative view will invalidate if the bulls push the price above the moving averages. Such a move will open the gates for a rally to $42.28 and then to the all-time high at $48.36.

The long tail on the candlesticks of the past three days shows strong accumulation by the bulls at lower levels. The buying picked up momentum today and the bulls are attempting to push and sustain Uniswap (UNI) above the $35.20 resistance.

If they manage to do that, the UNI/USDT pair could retest the all-time high at $39.60. A breakout of this resistance could signal the start of the next leg of the uptrend, which may reach $44.88 and then $50.

This positive view will invalidate if the price turns down from the current level and slips below the 20-day EMA. Such a move could keep the pair range-bound for a few more days.

Litecoin (LTC) slipped below the 20-day EMA ($252) on April 20 but the bulls arrested the decline at $234.43. The long tail on the day’s candlestick suggests strong buying at lower levels. The buyers are currently attempting to sustain the price above the 38.2% Fibonacci retracement level at $270.12.

On the contrary, if the price turns down from $270.12, it will suggest that the sentiment has turned negative and the bears are selling on rallies. That will increase the possibility of a drop to the 50-day SMA ($216).

The bulls have successfully defended the support at the 50% Fibonacci retracement level at $828.24. Bitcoin Cash (BCH) could now rally to $1,041.70 where the bears may again mount a stiff resistance.

However, the upsloping moving averages and the RSI in the positive territory suggest the path of least resistance is to the upside. If the bulls can drive the price above $1,041.70, the BCH/USDT pair could retest the 52-week high at $1,213.51.

Contrary to this assumption, if the price turns down from the current level and breaks below the 20-day EMA ($797), it will increase the likelihood of a deeper correction. The 61.8% Fibonacci retracement level at $737.31 may act as a support but if it cracks, the pair could drop to the 50-day SMA ($618).

The views and opinions expressed here are solely those of the author and do not necessarily reflect the views of Btcshop4u. Every investment and trading move involves risk. You should conduct your own research when making a decision.