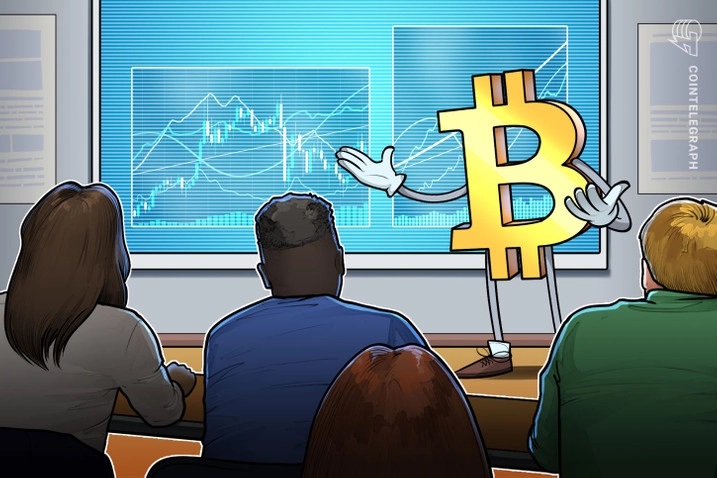 Bitcoin bulls fell short of flipping the $38,000 level to support, and one analyst said on-chain data signals that BTC could see “a smaller drawdown.”

The cryptocurrency faithful got a reprieve from recent market struggles thanks to a rally in decentralized finance (DeFi) tokens and Dogecoin (DOGE) on June 2. A bit of a breakout in the price of Ether (ETH) and Bitcoin (BTC) may have also lifted sentiment, but at the moment, the top-ranked digital assets are still meeting pushback at key overhead resistance levels.

While the uptick in prices has many calling for a continuation of the 2021 bull market, some analysts have highlighted a possible bearish pennant formation on the Bitcoin chart, which could result in a price breakdown to as low as $16,000.

Bitcoin’s volatile price action over the past month has led many to speculate on whether the top is in for BTC or the current correction is just a mid-cycle breather that will prepare the asset for continuation once the rally resumes.

Deeper insight into the matter was provided in a recent Delphi Digital report that discussed the MVRV ratio, an on-chain metric that measures Bitcoin’s market value (MV) against its realized value (RV) as an indicator that can help traders determine market tops and bottoms.

The chart above shows that the MVRV ratio became overextended in early 2011, late 2013 and early 2018, “all of which represented cycle tops,” as highlighted by Delphi Digital. The researchers also suggested that “May 2021’s reading could very well indicate the top for this cycle.”

While it is possible that the top may be in for the current cycle, Delphi Digital also noted that there is the potential for the market to “see an outcome that resembles 2013’s ‘double bubble’ where BTC made an ATH [all-time high], price fell hard, and then recovered well past the ATH in the same year.”

The report further highlighted the fact that the threshold for determining Bitcoin’s bottom has increased over time, which could change the landscape of bull markets in the years ahead.

According to Delphi Digital:

“Given the steep drop in MVRV so far, it’s possible that BTC could see a smaller drawdown and a quicker bottom than in previous cycles. This would resemble something like global equities, which have multi-month corrections and multi-year bull cycles.”

As a note of caution, the report did point out that while “There’s a lot of conflicting data and sentiment” in the market currently, there is likely to be “an episode of mean reversion in coming weeks as price deviated far from its 50 day moving average.”

“Historically, BTC price has been fairly close to its 50 day MA. And looking at previous drawdowns, BTC has always posed a healthy relief rally after a deep retracement. This is a result of natural market reflexivity.”

Altcoins notched double-digit gains during June 2’s price action, led by a 53% gain in the price of Kyber Network’s KNC token, which is now back above $2.50. KAVA also secured a 37% rally and currently trades near $4.70.

Dogecoin, Kusama’s KSM token and Curve DAO’s CRV token also helped lead the altcoin charge, with price rallies around 25%, while OKB put on a 33% gain and trades near $17.70.